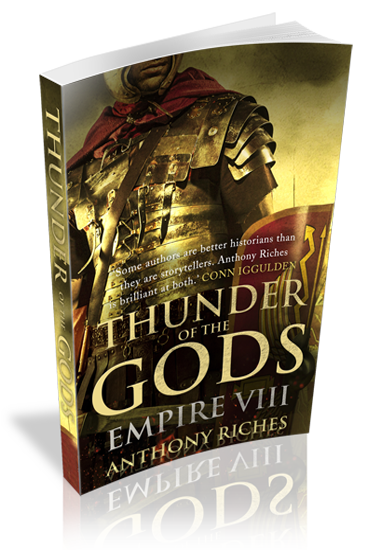 The eighth book in the Empire sequence takes Centurion Marcus Aquila and his Tungrian legion on a dangerous mission to the heart of the Parthian empire. With Rome no longer safe Marcus and the Tungrians are ordered east, to the desolate border lands where Rome and Parthia have vied for supremacy for centuries. Ordered to relieve the siege of an isolated fortress, their task is doomed to bloody failure unless they can turn the disaffected Third Legion into a fighting force capable of resisting the terrifying Parthian cataphracts. And Marcus must travel to the enemy capital Ctesiphon on a desperate mission, the only man who can persuade the King of Kings to halt a war that threatens the humiliation of the empire and the slaughter of his friends.

“Thunder of the Gods” is published in the UK by Hodder & Stoughton.