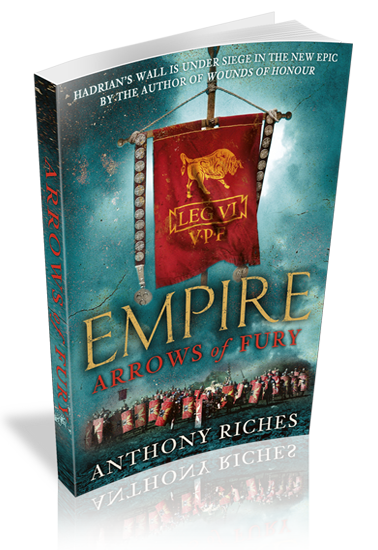 The Battle of the Lost Eagle saved Hadrian’s Wall, but the new Roman governor of Britannia must stamp out the rebellion of the northern tribes or risk losing the province. Rampaging south with sword and flame under the command of their murderous chieftain Calgus, they have stretched his forces to the limit. For Marcus – now simply Centurion Corvus of the 1st Tungrian cohort – the campaign has become doubly dangerous. As reinforcements flood into Britannia, he is surrounded by new officers with no reason to protect him from the emperor’s henchmen. Death could result from a careless word as easily as from an enemy spear. Worse, one of them is close on his heels. While Marcus is training two centuries of Syrian archers to survive a barbarian charge and then take the fight back to their enemy, the new prefect of the 2nd Tungrians has discovered his secret. Only a miracle can save Marcus and the men who protect him from disgrace and death…

Sunday Times bestseller “Wounds of Honour” is published in the UK by Hodder & Stoughton.