The Ravenstone Valley in pictures

When Trajan sent fourteen legions across the Danube to subjugate Dacia in AD105 over half of the total number available to him across the entire empire – it was ostensibly with the intention of subjugating a deeply troublesome Dacian king, Decebalus. But there was an additional incentive for Rome to deal with this fractious neighbour on the north-eastern frontier, an obvious and deeply attractive subtext to the emperors expansionist venture. And when his successor Hadrian drew back from Trajan’s conquests in the east seemingly of his own free will but with a clear eye to their indefensibility – there was never any question that Dacia would be remaining firmly under imperial rule. Why? The answer was that Dacia was blessed with gold, with over 250,000 kilos of the metal in its royal treasury and enough remaining in the mines, it was said, to pave the road to Rome with solid gold cobbles.

And when I set to researching book five in the Empire series, The Wolfs Gold, it wasnt hard to work out what should be the epicentre for the storys action the mining settlement of Alburnus Maior. There is evidence of gold mining in Transylvania, both archaeological and indeed metallurgical, that dates back to the Stone Age, but under Roman occupation the process was industrialised to degree possible given the technology of the day. Alburnus Maior was established as a mining town under Trajans rule, with Illyrian colonists from Dalmatia shipped in to provide a compliant workforcewho thenset about tunnelling into the Carpeni Hill, retrieving the gold that could be reached by the relatively primitive methods that were available to them. Largely mined out in terms of the technical means available by the early third century, the settlement was probably a shadow of its former self by the time the Romans left in AD271.

Mining continued off and on over the intervening two thousand years, with an increasing burden of heavy metal pollution being inflicted on the valleys ecosystem by large-scale activities under the Austrian empire and latterly by the communist rulers who came to power after World War 2. But with the turn of the 21st century a new and far more serious threat to the surviving Roman remains has emerged. Thepreviously relatively undisturbed Rosia Montana, as the area is now known, taking its name from the river Rosia that flows down the valley, has been earmarked for mining on a scale that would have astounded the Romans.

The Rosia Montana Gold Corporation plans to produce 225 tonnes of gold, and 819 tonnes of silver over a 17 year period, digging out four mining pits over two hundred hectares and in consequence storing 250 million tonnes of cyanide heavy tailings the rock slurry thats left after the chemical separation of their precious metal component in a 360 hectare pond behind a 185 metre high dam. While the plan is currently tied up in an environmental assessment, and mired in a web of environmentalists, activists, archaeologists and (perhaps most effectively) lawyers, all focused on both the environmental risks of cyanide leaching and the loss of these unique Roman sites, money, as ever, talks.

Think about it. 225 tonnes of gold is equivalent to about eight million ounces of the metal, and at current prices – $1200 an ounce thats a cool $9,600,000,000, or getting on for ten billion dollars. Even taking the current abandon with which money is thrown around in the global currency system, thats still more than enough money to focus a lot ofminds on means of taking the brakes off the current development restrictions. In the face of opposition from the Roman Orthodox Church, the Romanian Orthodox Church, the Romanian Unitarian Church, Greenpeace and the European Federation of Green Parties and indeed the Hungarian government (although RMGCs Canadian home government is predictably in favour), the Romanian government nevertheless attempted to pass a law to bypass environmental and heritage regulations in 2013. With such an evidently naked attempt to get the project started major protests were certain to result, and the countrys Senate stepped in to veto the idea.

And there the plan rests, currently stymied but clearly not going away. My money would on the likelihood that love the love of money will always find a way in the long run, and that this precious snapshot in time of a Roman mining town will eventually be destroyed in the name of the greater good. And so I invite you to enjoy with me the pictures that one of my readers, Bogdan Botar, has sent to me from Romania.

In his own words:

I just started to read the Wolfs Gold, and I find the story very gripping. It may come as a surprise to you, but what has impressed me the most so far is the accuracy with which you describe the area around Alburnus Maior (todays Rosia Montana). You must have studied the area map very thoroughly. I can certainly appreciate that since this is the place where I spent many of my summer holidays as a child and I still visit the region regularly. The location of the village has most probably remained unchanged since the Roman times. The valley leading to Rosia Montana and the surrounding gold mines may not be named Ravenstone Valley but guess what, the peak to the south overlooking the village is called the Ravens Stone! Were you aware of that?

P.S. Just a final and important note. Currently, the area around Rosia Montana is threatened by a highly controversial mining project, which if approved will have catastrophic effects on the local environment and beyond. Id also like to send you a few pictures of this beautiful area. Might also be of interest for some of your readers.

And so here are those photographs thanks Bogdan, for sharing your memories with us and showing us an aspect of Roman history that might now be with us much longer. Captions courtesy of Bogdan Botar. Click on the photos for a bigger image. 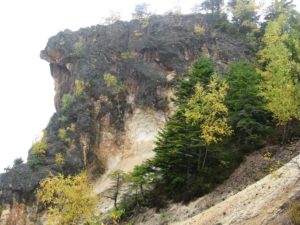 2: A view of the Raven Stone circled and Rosia Montana (Alburnus Maior) on the right of the picture 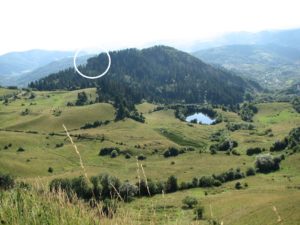 3: A view of the Raven Stone and left of it the main (open pit) gold mining site. Until the 1970s this was a very different landscape – one round mountain towering over the Raven Stone full of mine shafts and to some extent hollow on the inside. Apparently, there were some interesting constructions inside including a large hall and something referred to as the “Emperor’s throne”(!) all dating from Roman times. Sadly, as I mentioned it was completely erased (turned to gravel) in the 1970s. 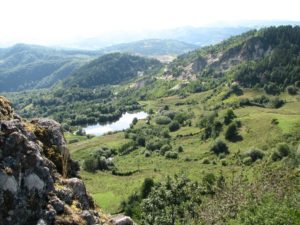 4:A view of the village itself (Rosia Montana) taken from the Raven Stone peak. If you look closely you can see some mine openings nearby I guess the equivalent of Rotunda Mine on your map)

5: An area view of Bucium – this is just a nice landscape of the surrounding areas (just a couple of km away from Rosia Montana). 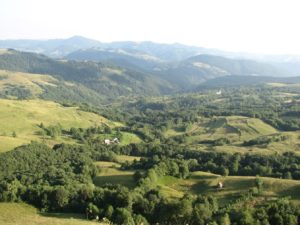 6: These are basically the hills forming the northern flank of the valley. The lake in the picture is also shown on your map. 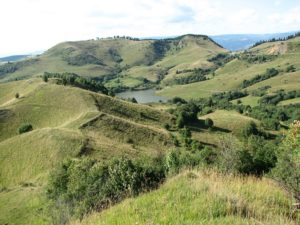 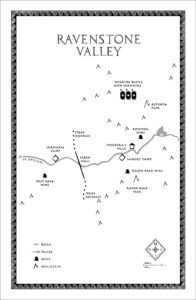 And finally, here’s the map that Bogdan referred to if you want to know any more, The Wolfs Gold is available from all good booksellers!