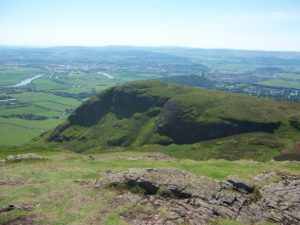 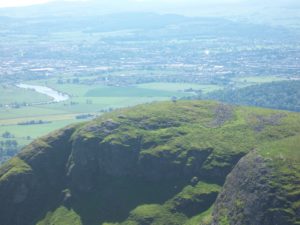 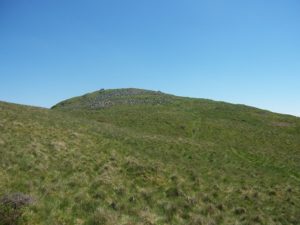 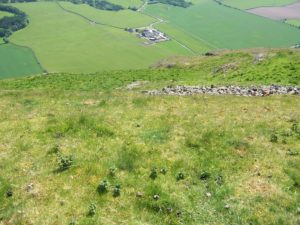 Readers of The Eagle’s Vengeance may find themselves wondering whether the Fang, the Venicone fortress atop the range of hills that runs past modern day Stirling, ever actually existed, or has Riches simply made it up in the search for good ground across which his characters can then play? Well, for the avoidance of doubt, it existed.

These days the Venicone (and then Maeatae) fortress that I’ve quite cheekily named ‘The Fang’ is called The Dumyat, and it’s an easily walkable hike up from Stirling (easy if you choose the right path, that is!). The view from the top is nothing less than stunning, as you’ll see from the pictures I’ve attached, taken back in 2008 when the idea of a return to the Antonine Wall was tickling the back of my mind without the series being in the right place for it to happen for a year or two.

Taken from the north-east of the fort’s historic location, these pictures illustrate just how sheer the southern slope of the hill is, while the other pictures illustrate the view an attacker would have had and show the vestigial remains of a stone wall that was once part of the defences that once stood proudly over the flood plain of the Dirty River (a stream so flooded with silt that the raised bog of Flanders Moss was well nigh impassable until large parts of it were cleared in the 18th century) are still there, if you look hard enough. It’s easy to imagine what a difficult place it would have been to assault, even with the Roman expertise at siege warfare. Recommended, if you live close enough to make a visit.