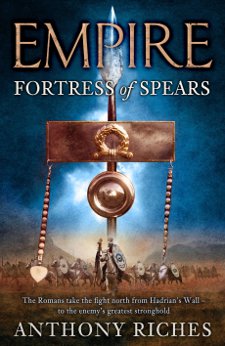 In the enthralling third volume of ‘Empire’, Anthony Riches takes the legions deep into north Britannia, where the survivors of the rebellion still hope for revenge.

The Romans have vanquished the rebel alliance, leaving Calgus, Lord of the Northern Tribes, the prisoner of the chieftains he once led.

But the new Roman leader will not let them rest. He forms an audacious plan to capture Dinpaladyr, the Selgovaes’ fortress of spears, and return it to the hands of a trusted ally.

Marcus Aquila – burning for revenge on an enemy army that has killed one of his best friends – is part of the select group of infantry chosen to go north with the Petriana cavalry and take the fort before the rebel army can reach it. He believes his disguise as Centurion Corvus of the 2nd Tungrians is still holding.

But he is just a few days ahead of two of the emperor’s agents, sent from Rome to kill him. Pitiless assassins who know his real name, and too much about his friends.